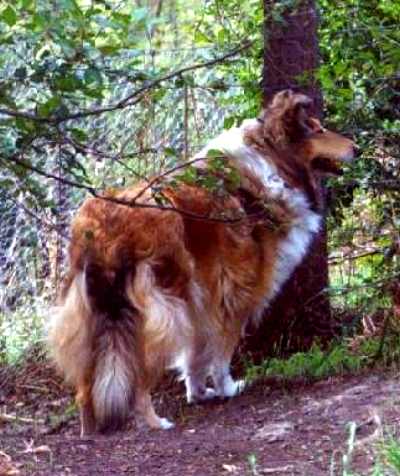 Let me tell you about our most contrary collie. I’ll start with the fact she is camera shy and that is why we have photographs like this. Should she see you with a camera or video she disappears. (Here you see her in the top photo at 9.5 years of age).

She didn’t have a love of the show ring and even though she accumulated over half the points needed for her title and had nice comments from several different judges regarding her lovely sound movement, her loathing of the all the show procedures gained her early retirement.

I thought motherhood might be her forte and sent her to Melbourne three times. Each time, on her return, we waited anxiously for babies. I am sure due to her contrary nature, she refused to fall pregnant!  Deciding to give her one final chance,  I mated her to Baqilodge Heart and Soul who resided at Pintado Kennels and, would you believe, she gave us the very handsome Ch. Baqilodge Jemslegacy and the most gorgeous Baqilodge Jemsgift. There were only the two babies but they were exceptionally special. Both have had great show careers.

As Danza was a great mum and very healthy, I decided to mate her again on her following season to Ch. Corydon Outlawed to Oz (Imp UK), owned by Lynn Young. Remaining true to her contrary nature, she produced ten beautiful, healthy puppies, which she proceeded to rear with great skill. We have the lovely Baqilodge Knock On Wood from that litter.

She is also the mother of both the Bitch and Dog Reserve Challenge winners of the 2000, as well as mother of the Dog Challenge and Runner-up Best of Breed of the 2001 and 2002 shows of the Tasmanian Collie and Shetland Sheepdog Club.

She is dam of Pintado Kennel’s, Ch. Baqilodge Jemslegacy who was the Runner-up Best Exhibit in Show at the large all-breeds Dogfest Championship Show in October 2001 with an entry of over 1,000 dogs.

Danza now is a permanent house-dog who sleeps beside my bed. (She flatly refused to go back to the kennels after her last litter of puppies).